I am grateful to Michiel who blogs a 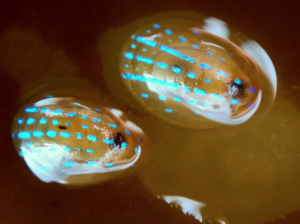 s An Bollenessor for this beautiful picture of blue-rayed limpets, little-known treasures of our coastline. As the days rapidly shorten here in the UK, it’s good to have something luminous to brighten up the day. These spectacular tiny molluscs live on kelp. They also happen to appear in some flash fiction homework I submitted to SJ Bradley on her Comma Press short story course.

The object that starts my story is an ichthyosaur vertebra found in the beck at Boggle Hole, Robin Hood’s Bay over 50 years ago. It played a part in my childhood and is used by the narrator of the story to try and grab the attention of Lewis, a youth who has been excluded from school. You will notice that the bone has, as an extra bonus, the cast of an ammonite in one of its concavities. This fails to impress Lewis. He finds a blue-rayed limpet at low tide himself, its unique light sparks the start of his transformation.

The limpets reflect only the blue rays from ambient light, their unique method of illumination has recently been uncovered by scientists at M.I.T. and may even lead to practical applications for humankind. All very interesting to someone like me with a scientific bent, but what about writing, which is supposed to be the theme of my Pangolin blogs? I would like my prose to be more like a blue-rayed limpet – translucent and intriguing, reflecting unexpected light back to the reader. Often it feels more like an opaque and rigid ichthyosaur fossil – interesting but lifeless. I don’t want this metaphor to extend too far, the limpets not only feed on kelp as they grow, they sometimes destroy the very thing that sustains them.

During the last couple of weeks, I have enjoyed reading Black Dogs and the Colour Yellow by Christine Barrow, a short story collection published by Peepal Tree Press. It is inspired by Christine’s working lifetime in Barbados and has a great variety of carefully-observed characters written in her varied and intriguing style. I have never been to Barbados but there is a rhythm and a depth to Christine’s prose that tempts me to visit. We were both on the same Arvon course a few years ago at Totleigh Barton. A few others on that course have also been published subsequently, so I have a bit of catching up to do. My next read will be Overstory by Richard Powers, shortlisted for the Man Booker Prize, but chosen by me for background reading because Ogden, the lover of the main character in my second novel, would rather be a tree.

My other writing priority is to work on my application to Cinnamon Pencil which is Cinnamon Press’s revamped mentoring scheme. As usual, the biggest challenge will be writing a synopsis. Last week I indulged myself by becoming a member of The Leeds Library, which is celebrating its 250th anniversary this month. I am looking forward to spending this Friday there and using the opportunity to knock out a summary of the intricacies of Novel 2.

For next month’s Pangolin expect something atmospheric from the Llanberis Pass where my mindful soulmate and I hope to spend a long weekend of art and writing.