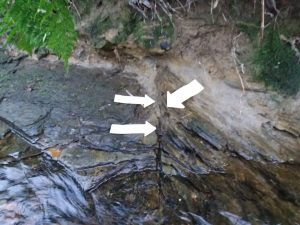 Is this a fault? I tweeted this question to the Friends of Gledhow Valley Woods @FGWInfo. No doubt a local geologist will surface soon to let me know the answer. Chapel Allerton is that sort of place.

The woods are a thin strip of green (brown at this time of year) that I can see from my study window. Statuesque beeches, gnarled oaks, a few alders (hence the Allerton), a muddy lake that marks the end of the beck before it disappears into a culvert. An amazingly diverse ecosystem, considering its size and location. The very first piece of writing that I shared with the Leeds Writers Circle was set in these special woods.

I thought I knew the valley well, having lived in the area for over 30 years, but I have only recently found the fault. If it is a fault, then it represents less than a foot of displacement – a minor upheaval among countless earthquakes when the Carboniferous rocks, laid down in seas, deltas and swampy forests, were propelled upwards to make the Pennines.

Ahem. This is supposed to be a writing blog. I am sending Yetunde’s House out to agents this month, some of them might even read this Pangolin, or other samples of my work on the website. Let me reassure you, there is a purpose to all this geomorphology and the metaphor of a found fault. We are not talking about editing, though there has been plenty of that lately, I am thinking about the hidden ruptures within family histories, the cataclysms that we try to subdue and grass over. Freya, aged 56, the main protagonist of my second novel, carries the surgical scars of a blighted youth, but it is death of her father that reawakens her desire to confront and expose her nemesis.

I have many of my parents’ photo albums at the moment, so I can make copies of key pictures so each branch of the family has enough, and everyone knows who has got what. My paternal grandparents were missionaries in China. We have one of those old black albums with tiny pictures, some described in immaculate hand-writing in white ink, but a lot unlabelled and enigmatic. There is a story to be told about Mary Davies, who became my Granny Cundall. She travelled to China on the Trans-Siberian railway as a single woman in 1916, in the middle of the Russian revolution. Oral history says they were chopping up the furniture to feed the engine. We have a picture of her as a fresh-faced young woman before she set off as a young teacher into the unknown. A destiny that included marriage to my missionary surgeon grandfather, two dead babies before my Dad and his sister lived, invasion, war, revolution. I don’t need a picture of her as a kindly wrinkled old lady, I remember her well as she lived nearby for most of my childhood. So many missed opportunities to ask about her life – I was, no doubt, too preoccupied with my own.

Freya’s story is not set against backdrop of such dramatic world events as Granny Cundall’s. The narrative propulsion for Not Letting Go: a beginner’s guide is energised, at one level,  by Freya’s internal conflicts. However, I now realise that lurking underneath that fiction, at the undisclosed heart of this story, are inner fears of mine, some of them also suppressed for over 30 years. Creative tension, don’t we all love it?

My next Pangolin is due out February 15th. Always remember the real pangolins.